What is Pop Leadership and Why is it Harmful? 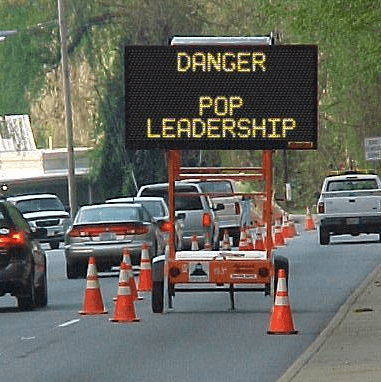 What is Pop Leadership and Why is it Harmful?

Because pop leadership sounds wise and profound – but it is more often either trivial or wrong.

Dan Dennett (famous Tufts philosopher) coined the expression “deepity” – which is a statement that is apparently profound but actually asserts a triviality on one level and something meaningless on another.

Take this gem. “Everything is connected”

Well of course, in a trivial sort of way – quantum entanglement “spooky action at a distance” means even particles far apart are “connected.”  On the other hand, some connections matter a lot, some a little, and some not at all.  My shaving cream does not affect immigration policy very much.

What could be wrong with the leadership version of deepities?  Let’s see what pop leadership costs below.

From Pop Psychology to Pop Leadership

This is an excerpt from my Behaviors and Influence: The Science of Change Leadership – coming to fine bookstores near you in April 2019.

Leadership is a serious business: Senior business leaders are stewards of enterprises in which they only have a small moral stake (compared with thousands or millions of others) and vast power.

They are the custodians of people’s livelihoods and when they screw up, people lose those livelihoods.

Leaders make or break countries, corporations, and communities. They must serve shareholders, staff, and customers, and their judgments affect the economy, the jobs of millions, and the environment.

Leadership can be learned, but it takes considerable skill, hard work, significant character development, great foresight, and the right context or opportunity.

At the very least, it includes an attitude of care (stewardship) toward stakeholders; a solid foundation of expert knowledge and dedication to keeping up to date; substantial skills in influencing and other people-related skills; the ability to deal with stress and conflict; alignment in thought, word, and deed; a strong moral code; great motivation and drive; an ethical/ values stance; and a clear sense of purpose.

Pop psychology abuts what I call “pop leadership,” which, I will argue, is among the most destructive forces in the business world, trivializing leadership, spreading misinformation and half-truths, and drowning out serious attempts to understand an important subject.

Here are two titles of pop leadership articles, from one of the most auspicious business journals.

“Leadership Wisdom Tells Us Not to Think Too Much.”

Sounds wise. Is that true? Or could it be that the costliest leadership errors come from thinking too little, leaping to conclusions, or being too confident in biased thinking?

3500 people on LinkedIn thought it wise enough to like.

Or, “Leadership is about Emotion.” In leadership, nothing is as important as relationships, and, yes, emotion is central in those.

From Forbes magazine – they ought to know. Do they? Again, on the one hand trivially true, and on the other hand dangerously false.

Let me offer you one from uber-guru Drucker: “Leadership is about results.”

Profound right? Pure nonsense.  Duh results matter. BUT. We care how leaders get results – in fact, an honorable, competent, trustworthy leader who fails (due to circumstance) is ten times better than an autocrat, dictator, fool who succeeds.

In fact, leadership is all about the how because there is always chance in the system – you can play the game perfectly, and struggle, or you can play incompetently and luck out.  (See Nassim Taleb’s book Fooled by Randomness.)

In no other domain of human performance, being a virtuoso musician, a famous athlete, or an innovative scientist, do we distill success down to such half-truths (1 percent truths sometimes) and trivialities (for example, “golf is all about swinging the club” or “playing the piano is about feeling the keys”).

Ignore one-line leadership “wisdom” (including this)

I worry that thoughtful, scholarly, reflective, humble, insightful, and wise leadership education, so vital to communities, corporations, and governments, is trivialized.

Let me ask you one question.

If a book full of pithy pop leadership sayings were devoured in its entirety, would it create an excellent business leader?  If you read it cover to cover, are you better equipped?   Would reading it have prevented Enron? Would they learn anything?

The most intriguing (and worrying) feature of pop leadership is the lack of critique.

Ask yourself how often you have seen a critique of the ideas of Drucker, Kotter, Christensen, or Bennis. No scientific idea, nor any scientist— not even Hawking, Turing, or Einstein—gets a free pass the way management thinkers do.  When a statement about leadership is preceded by “according to Drucker,” it is taken as axiomatic—like the angles of a triangle adding up to 180 degrees.

This is even worse on social media – on LinkedIn and on Twitter.

In the last five years, there have been a proliferation of leadership “memes”.  Take an image, attach a few words of wisdom, broadcast widely, and you will attract thousands of likes and shares.

In pop leadership, the source of the quote matters more than the content.  Take this piece of Maxwellian “wisdom”: “People buy into the leader before they buy into vision.”

Is this true? No, it is another deepity – sounds wise, but let’s switch on our critical thinking.

I think the opposite is more often true – people only gain initial insight into a leader by hearing their vision and values – how else would they “buy in?”  Sure, character matters (tons), but we mostly get insight into character AFTER we witness their words and deeds.  Further, some visionary leaders were just plain jerks – Jobs, often; Gates, sometimes; Zuckerberg and Musk, still.

But, aren’t these quotes are at worst harmless, and at best uplifting, inspirational, and heartfelt?

I do not think statements such as those are harmless because their inspirational ideas can be mistaken as information or prescriptions on how to live.  They consume oxygen in the “wisdom literature” depriving people of insights that are truly wise.

They also train the mind to shut off critical thinking, to accept something that sounds true (truthiness) – or what Orwell called bellyfeel (something that feels right irrespective of whether it is correct) – whether or not it meaningfully tracks the truth.

Of course, all of these can be interpreted in different ways because of their vagueness – that may indeed be their strength.

The world, for sure, has a place for inspirational speech, for the uplifting and empowering, even when the truth-value is zero.

Our folk psychology, folk management, pop psychology, and pop leadership provide a bad set of answers to leading complex change. We are still looking for sources of systematic knowledge about what makes people tick, and even if we inoculate ourselves against guru hype, we are surrounded by psychological myths that have a veneer of science to them.