TRUTH WARS: How we will survive fake news, post-truth, and the war on science 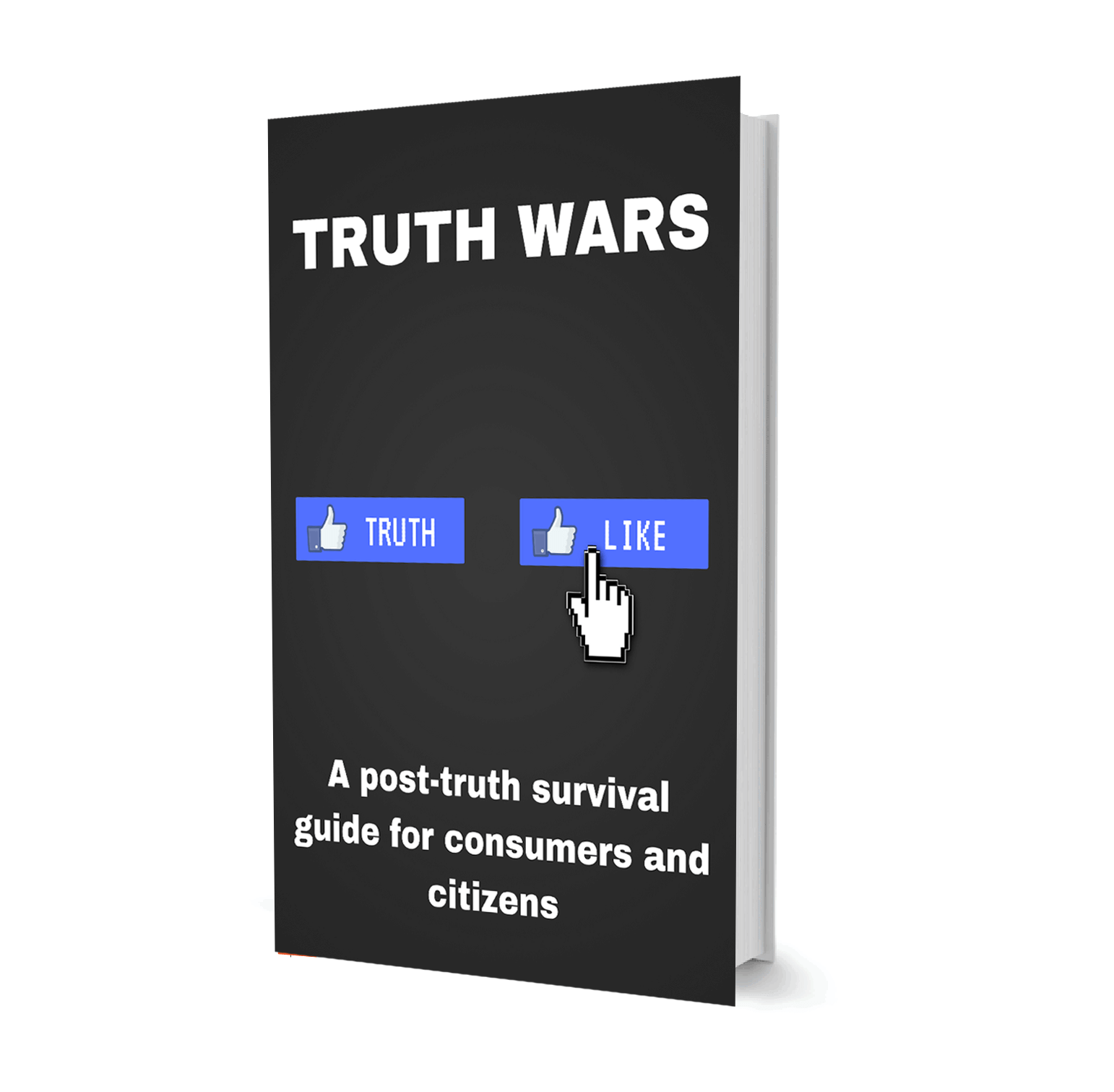 From the introduction to Paul Gibbons’ Truth Wars:

The grim, post-industrial town of Veles, Macedonia (pop. 55,000) has an average per capita wage of $371 per month. During the 2016 US election campaign Veles was home to several hundred fake news websites each churning out 5-10 stories a day. This brought fame and fortune to a group of 20-something “entrepreneurs” who earn twenty times their town’s average. They make all this money from “clicks”, “shares”, “RTs”, and “likes” from we suckers in the West who prefer fake news to the real stuff. While we might deplore their amoral indifference to the consequences (secretly admiring their capitalist moxie), it would be silly to blame them. We should instead worry most about our culture, the one that devours fake news and that makes Veles’ business model so lucrative.

Half a planet away in Houston, we find Exxon whose annual revenues are about ten times Macedonia’s GDP. Until very recently, the oil behemoth used its considerable financial muscle to fund advocacy groups hostile to climate science, furnishing climate skeptics with over $30 million. (This figure excludes vast sums spent on lobbying, advertising, public relations, and lawyers fighting regulation.) In 1996, CEO Lee Raymond claimed, “Currently, the scientific evidence is inconclusive as to whether human activities are having a significant effect on the global climate.” Had that money and those statements been a sincere representation of Exxon’s views, we could question their scientific judgment, but not Exxon’s honesty. Internal communications reveal, however, that Exxon had been aware for four decades of the CO2 threat to global temperatures, and the established role of fossil fuels in raising atmospheric CO2 concentrations. Their scientists had suggested such links as early as the 1950s, and confirmed them by the 1970s. By 1996, there was little scientific doubt inside Exxon; their business strategy, financial modeling, operations, and investment decisions (adroitly) took global warming into consideration all the while feeding a disinformation campaign externally. Despite this, should we blame Exxon? No, they play by the rules adhering strictly to the law (as written), and maximizing value for their shareholders. Our culture tolerates this and there a dozen instances where the full financial muscle of an entire industry has been marshalled against the public interest: for example, tobacco, neurotoxin tetra-ethyl lead (in gasoline), automobile safety (air bags, seat belts), and financial services protections for consumers (even obvious ones such as a financial advisor must act in the interest of their client – who else you might ask!).

Back in Europe, the Oxford English Dictionary awarded “post-truth” word of the year for 2016. Their too-narrow definition refers to political speech that owes no allegiance to facts, but that instead targets the anger and prejudices of certain groups. “Post-truth” politicians do not just lie, they have an Orwellian contempt for facts, even countable facts such as whether crime rates are low, or global temperatures are high. Once upon a time, we could rely on experts, technocrats, scientists, judges, and policy wonks to keep their lies in check, and to be the evidential, rational, and legal ballast in the ideological and political tempests. Now they are derided and dismissed, labeled “so-called judges”, “so-called experts”.

Post-truth politicians do not just attack experts, they go after the media. In dozens of countries, not just the US, they use their media access and power to spread lies in ways not seen since McCarthy’s “reds under the bed.” When that fails, they assassinate (in Russia), close them down (in Turkey), restrict media access (in the US), or brand them the enemy – “the real opposition party” according to Trump advisor Steve Bannon. This makes the media’s job impossible. They aspire to Olympian neutrality, but if they simply parrot what people say without fact-checking, they do a disservice to us all. However, when the media do fact-check they appear to be taking sides – this is inevitably the case when one side of the debate is looser with facts than the other. Nor are the media blameless victims in the truth wars – they need viewers so (in caricature) prefer drama to substance, urgent news to important news, and edutainment (charismatic quacks, gurus-du-jour, celebrity anti-scientists, and diet-fad peddlers) to education.

The newest weapon in the truth wars is the internet. We once hoped that the internet would deliver greater access to knowledge, and make us wiser, connected, globally aware, and more reasonable. It has not. On social media, trolling, rants, fabrications, and hate-speech propagate more quickly than reasoned arguments and civil discussion. More than half of Americans, and nearly half of Europeans now get their news first online. Diversification of “news” producers mean fringe beliefs can aggregate, form communities, and attract sympathetic followers. Paradoxically, the science of how networks work creates “the majority illusion”, where the reach of fringe views is disproportionately amplified and so attracts more interest than orthodox ones. Algorithms (essentially) tell you what you want to hear – if you believe Pope Francis endorsed candidate Trump, more “news” like that will fill your inbox. “Likes” and “shares” tend to be emotional-impulsive, rather than reasoned-evaluative judgments: the limbic system, rather than the cerebral cortex does the liking. Popularity “trumps” accuracy. Social media trains us in appalling conversational habits: for example, name-calling, not listening, stereotyping, and not sharing assumptions or reasoning. Again, this is a cultural issue. We all, mostly, “know” what healthy debate looks like, but we get better at what we practice – i.e. practice being a Neanderthal and you get better at that rather than the good conversations skills you (in theory) “know.”

These four stories, the rise of fake news, corporate attacks on science and the public good, post-truth politics and their subversion of the media, and the rise of the internet and social media as a preferred news source outline the answer to our first question: where are the truth wars being fought? A more detailed treatment of that question occupies the first section of Truth Wars – entitled “The Lies in your Life.”

Fake news can be divided into three kinds. The first kind is news that is deliberately “made-up” and that the “perp” knows is manufactured. The second kind is news that is unarguably false, yet in the minds of the writer/ publisher is true. The third kind is satirical, from publications such as The Onion, who do not pretend what they say is the truth, yet has the appearance of a news article.