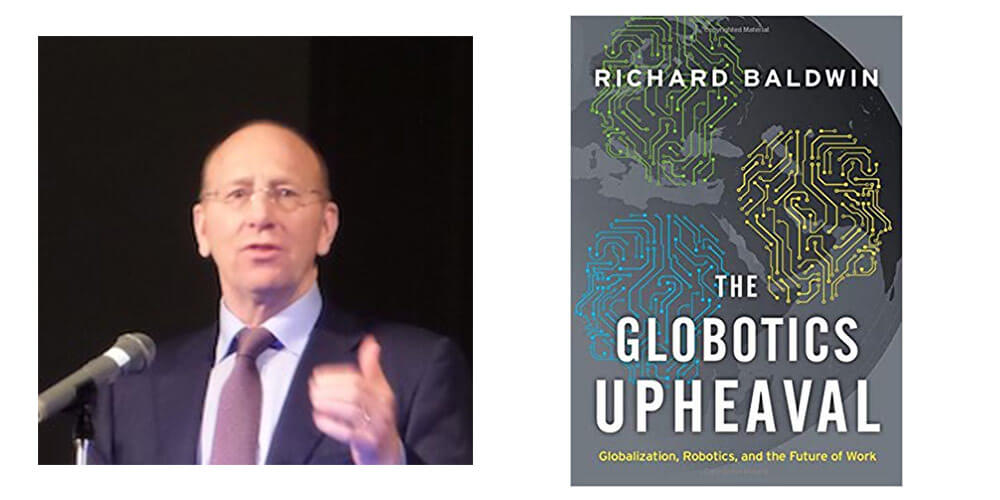 Listen to our podcast on trade, globalization, international economics, Brexit, and populism.

Happy New Year and welcome back to Think Bigger, Think Better. We’re kicking off the year with a great conversation about some of today’s biggest international issues and with a fantastic guest: Richard Baldwin. Globalization is a concept that is debated almost constantly (you could say one of the most pervasive discussions since 2016, Trump and Brexit) – is it inevitable?  Reversible? Beneficial? Today’s guest is one of the world’s foremost experts on the subject – a colleague mine from  Wisconsin in 1978, where I also took a class on International Economics from his father.

History of trade and globalization

Professor Baldwin is the author of The Great Convergence: Information Technology and the New Globalization.

He is a renowned American economist, expert on globalization, and professor of international economics at the Graduate Institute of International and Development Studies in Geneva. Richard is also ex-President of the Center for Economic Policy Research (CEPR), Editor-in-Chief of VoxEU, and was elected twice as a Member of the Council of the European Economic Association. And, he’s a research associate at the National Bureau of Economic Research, where he has been researching globalization and trade for the past 30 years. Clearly, we could hardly hope to interview someone more qualified to talk about changes in international trade and globalization.

We cover a lot of ground in this episode, beginning with a discussion about the history of globalization and how it’s ebbed and flowed over time. We also talk mercantilism, Trump’s trade policy, the rapid growth of China, and Richard’s globalization theory, the Great Convergence. Richard and I also talk about the state of Brexit and what’s likely to happen economically in Britain’s near future.

Richard also wrote the forthcoming book The Globotics Upheaval: Globalization, Robotics, and the Future of Work. We got on a roll talking about international trade, politics, and economics, so he’ll have to come back to talk about Globotics. I spoke with Jesus Mantas of IBM about the future of work a few episodes ago, and Richard’s emphasis on the role of robotics in globalization and the rapidly approaching changes to work will surely provide a new perspective for that conversation.